Knots Every Scout Should Know 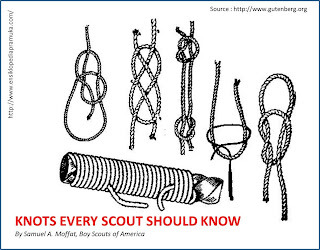 KNOTS EVERY SCOUT SHOULD KNOW
By Samuel A. Moffat, Boy Scouts of America


Every scout knows what rope is. From the earliest moment of his play life he has used it in connection with most of his games. In camp life and on hikes he will be called upon to use it again and again. It is therefore not essential to describe here the formation of rope; its various sizes and strength. The important thing to know is how to use it to the best advantage. To do this an intelligent understanding of the different knots and how to tie them is essential. Every day sailors, explorers, mechanics, and mountain-climbers risk their lives on the knots that they tie. Thousands of lives have been sacrificed to ill-made knots. The scout therefore should be prepared in an emergency, or when necessity demands, to tie the right knot in the right way.

There are three qualities to a good knot:


The following knots, recommended to scouts, are the most serviceable because they meet the above requirements and will be of great help in scoutcraft. If the tenderfoot will follow closely the various steps indicated in the diagrams, he will have little difficulty in reproducing them at pleasure

In practising knot-tying a short piece of hemp rope may be used. To protect the ends from fraying a scout should know how to "whip" them. The commonest method of "whipping" is as follows:

For the sake of clearness a scout must constantly keep in mind these three principal parts of the rope:
Before proceeding with the tenderfoot requirements, a scout should first learn the two primary knots: the overhand and figure-of-eight knots.

Start with the position shown in the preceding diagram. Back the end around the standing part and up through the bight and draw tight.

Make a bight as before. Then lead the end around back of the standing part and down through the bight. After these preliminary steps, the prospective tenderfoot may proceed to learn the required knots.

The commonest knot for tying two ropes together. Frequently used in first-aid bandaging. Never slips or jams; easy to untie.

If the ends are not crossed correctly when making the reef knot, the false reef or granny is the result. This knot is always bad.

This knot is used in bending the sheet to the clew of a sail and in tying two rope-ends together. Make a bight with one rope A, B, then pass end C, of other rope up through and around the entire bight and bend it under its own standing part.

A bight is first formed and an overhand knot made with the end around the standing part.

Used for shortening ropes. Gather up the amount to be shortened, then make a half hitch round each of the bends as shown in the diagram.

Used in hauling timber. Pass the end of the rope around the timber. Then lead it around its standing part and bring it back to make two or more turns on its own part. The strain will hold it securely.

Useful because they are easily made and will not slip under any strain. Their formation is sufficiently indicated by the diagram.

Used to secure a rope to a hook. The standing part when hauled tight holds the end firmly.

For joining a cord to a rope. May be easily made from diagram.

Used for tying silk-worm gut for fishing purposes. It never slips; is easily unloosed by pulling the two short ends. The two ropes are laid alongside one another, then with each end an overhand knot is made around the standing part of the other. Pull the standing parts to tighten. 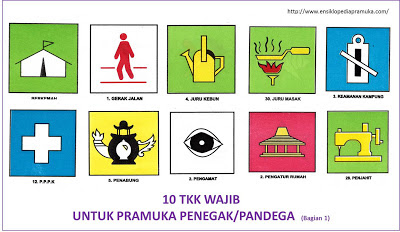 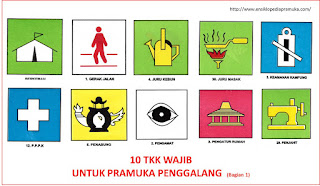 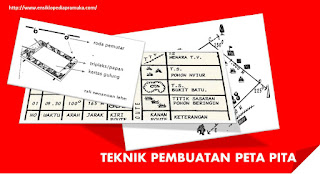